This is part 1 of a series of articles. For other parts, see the introductory article.

You’ll need a few things handy before you can continue:

If you haven’t already done so, fork the Ansible repo to a GitHub account or organization you have access to. Afterwards, clone your fork recursively so that it will also fetch associated git submodules:

Next, add the upstream Ansible repo as ‘upstream’

After this, you now should have two remotes with ‘origin’ pointing to your Github fork of the repo, and ‘upstream’ pointing to the upstream repo. You won’t be able to push upstream but you can fetch from it and then create pull requests which is how it should be.

I’m going to refer to your local clone as your ansible repo from now on.

Sidebar: Add a Few Git Aliases to Your Toolkit!

You don’t have to do this but if you want to follow along with my git commands, I’ll be using these below so feel free to add them to your ~/.gitconfig under the aliases section:

With these, you’ll gain the following git commands:

Prepare Your Environment For Local Development

While at the root dir of your ansible repo, run the following:

This will prepare your current terminal session and prepend the current ansible repo to your $PATH. Running ansible --version should get you something similar to this:

Provided you didn’t have any shims messing up your path, running which ansible should now show the <path to your local ansible repo>/bin/ansible. If not, you probably have some crazy shim-y stuff going on. Fix that before proceeding.

If you want to make this permanent, add the following to your ~/.bash_profile or ~/.bashrc:

…well, if you’re already familiar with these tools, that is.

To avoid having to cd up and down as I work on my modules, I use test.vim with vim and split my tmux windows into the following panes: 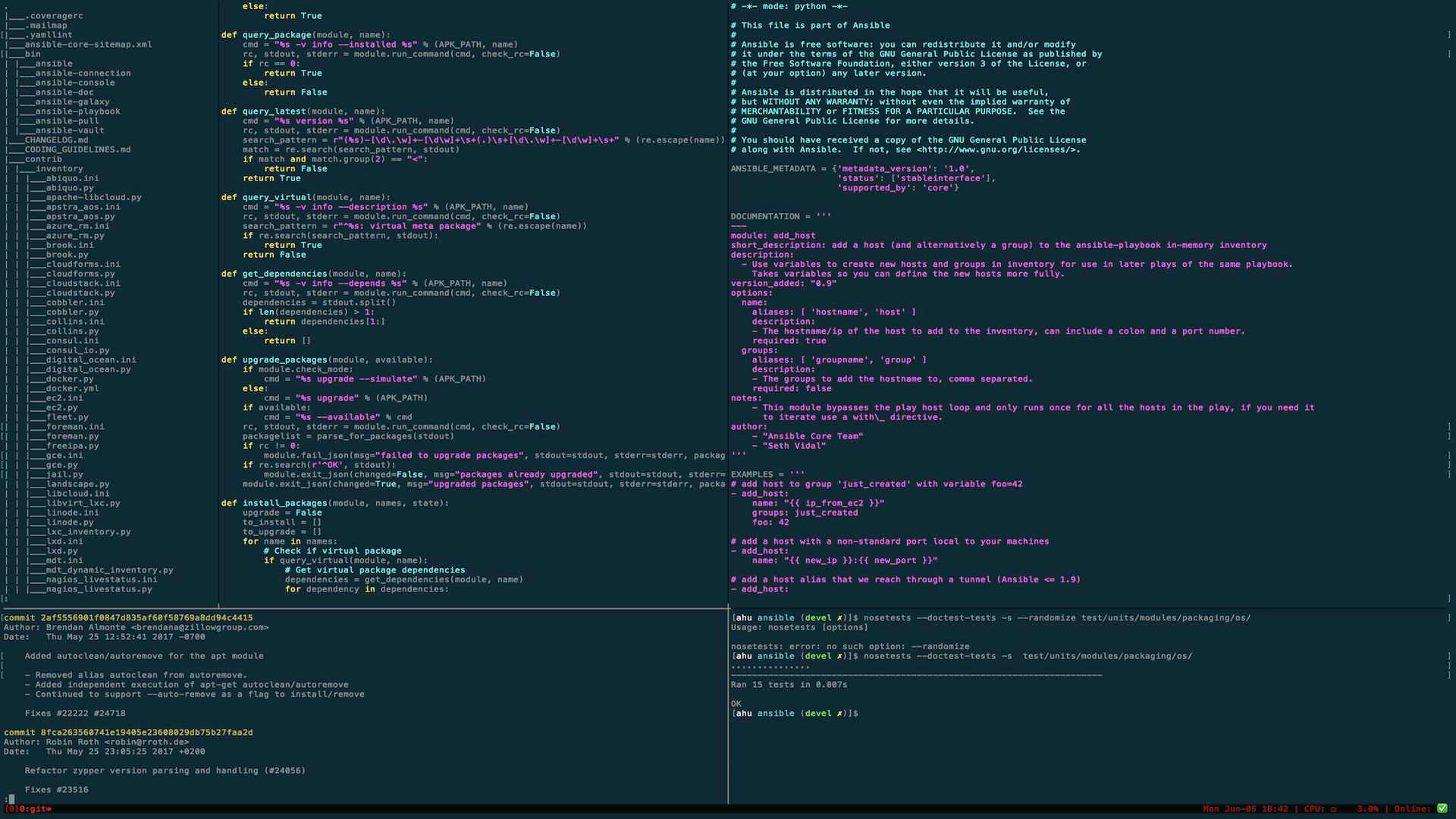 I have my dotfiles project here. Yes I still need to convert it to an Ansible playbook!

It’s like Flake8 for Ansible. From your ansible repo, run it with:

It shouldn’t output anything since the amazon modules are compliant. We will see it in a fouler mood later when we write a sample module. If you wan’t to know more about it, here’s its README.

Good job! Take a breather, then head on over to part 2 to create your very first Ansible module. Alternatively, you can go back to the the introduction if you want to jump ahead to other parts.