This is part 3 of a series of articles. For other parts, see the introductory article.

Run the test and see it fail. Let’s now write the code that makes it pass. First, add this near the top of your firstmod.py right after the first import line:

Then, modify your fetch() method to look like this:

Notice that we’re catching a URLError here. Import that class as follows:

Notice also that we’re raising a custom error class here called FetchError. This is so that we don’t have to write an except Exception catchall in save_data() which is poor error handling. So let’s add the following class to the file. I typically write this near the top, just after the imports.

Run the test again and see it pass.

Add the following test to test_firstmod.py:

You know the drill. Run to fail. Now write the code to pass it:

Like fetch(), this method also throws a custom exception. Add this to your code:

Run the test again to see it pass.

Let’s run the linter against our module:

That should list a few errors about documentation, examples, metadata, and the GPLv3 license header. Let’s fix that by modifying the top part to look like this:

For an explanation of these strings, see Ansible’s Developing Modules Page.

Test The Module Manually With Arguments This Time

We can write a playbook that uses our module now if we want to but I’ll leave you to do that on your own time. For now, let’s run it using the test-module script that comes with the ansible repo. Run the following:

Next, run the following to see what it downloaded:

It’s a good idea to run the sanity tests every now and then so that you’ll know ahead of time if you’ve introduced some non-compliant code into the source. From your ansible repo run:

If the test fails, you may have introduced some erroneous code. Check the error messages and fix as needed. If you’re sure it’s not your fault, check if you’re working on top of an old upstream commit. If that’s that case, rebase your changes to the latest from upstream and try again.

BONUS: Get some code coverage!

Writing unit tests is great but blindly writing tests is not enough. So let’s see how much of your module’s code is covered. For this, we’ll use Ned Batchelder’s awesome coverage library. To get started, let’s install it:

Next, we’ll use it with nose as follows:

By running this single command, you’ll get two things. First is a quick test coverage summary via the terminal. Second is an HTML format of the same coverage report with information on which lines of your code has been executed by your tests. A green line means it’s been executed (and therefore tested) while red means it was not. Go ahead and open /tmp/coverage/index.html in your browser and be enlightened! 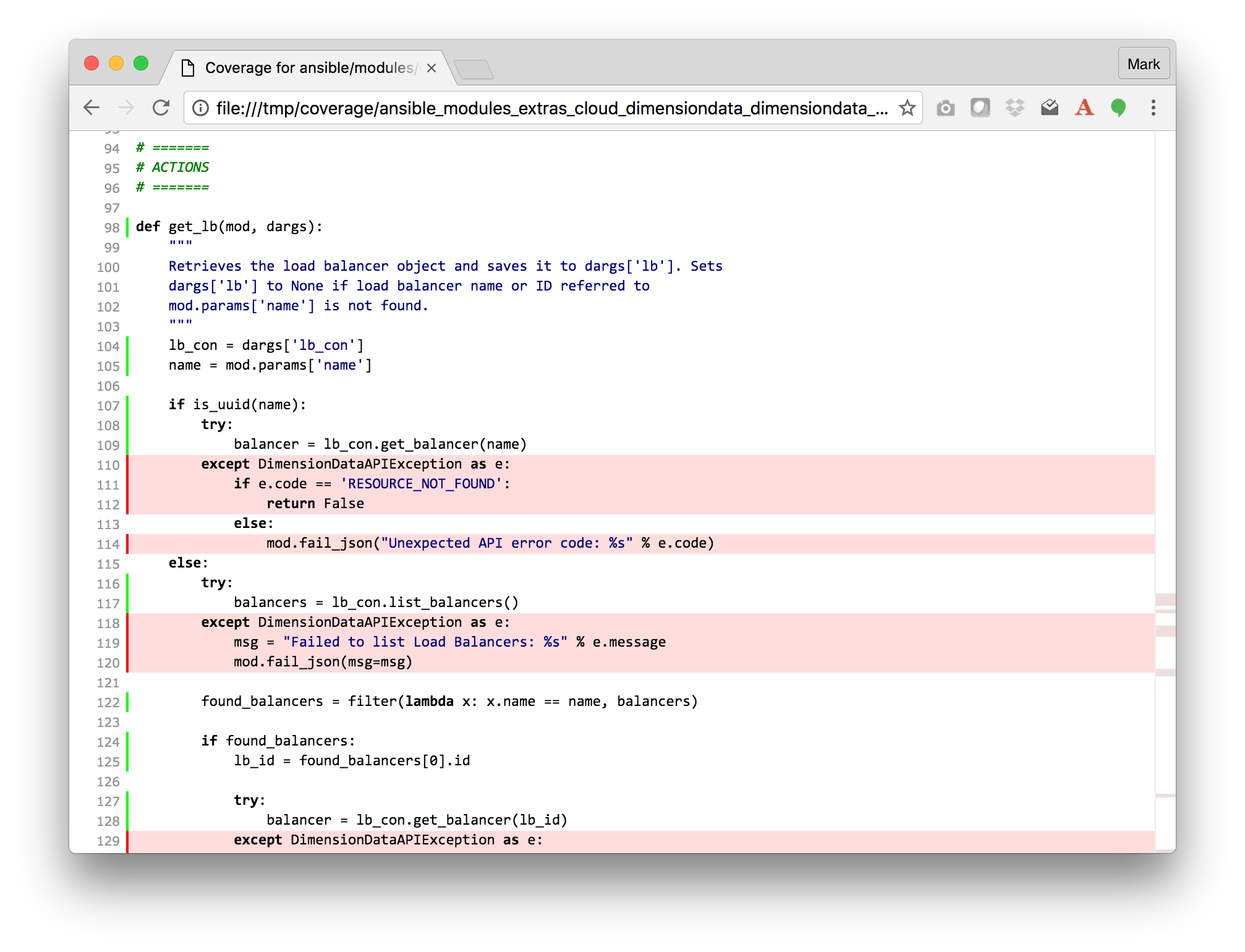 IMPORTANT: A fully covered module doesn’t automatically mean it’s bug free. But the coverage report is a great way to find out which parts of your code needs some testing TLC.

I hope you’re as pumped as I am for getting this far. You do realize that, in just 3 articles, you went from zero to writing a fully tested Ansible module. That’s quite an achivement so grab a beer (or whatever is your cup of…ummm…tea) and celebrate your awesomeness!

When you’re ready, head over to part 4 where we’ll learn how to submit our code upstream. Alternatively, you can go back to the the introduction if you want to jump ahead to other parts.