I needed to write a simple templating system in Bash and wanted to do it with TDD helping me along the way. Here’s what I came up with.

I’m not the first person to do this. I drew my inspiration from the following:

I wanted to be able to write a template script that contained placeholder values to be interpolated by my bash templating system as well as regular variables that should be left untouched. For example:

Could be rendered via:

And the output would be a file named my-script.sh with the following contents:

That is, only {{docker_storage_path}} would be interpolated but not $device_path and $message. This ruled out simple solutions using just echo.

That is, I wanted a testing DSL similar to RSpec where I provide the test name as the first arg, the variable declaration as the second arg, and the expected output as the 3rd arg in the form of a HEREDOC.

And just as important, I want this TDD framework and test as a single file with no external dependencies. 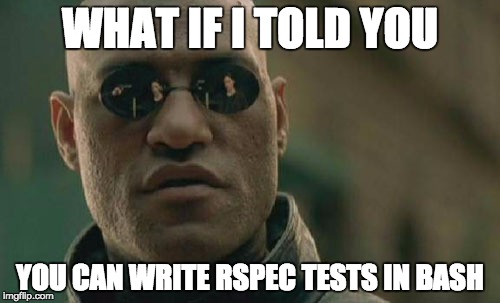 Turns out, it was not at all hard to implement it. Here’s the good bits

Now I could write my tests as follows:

When executing, the test outputs PASSES and FAILURES like so:

First, we take all the variable names used in the template and put them in a variable.

Next, we’d iterate through each varname to check if they’re defined. However, we have to be aware that we’ll need to do some meta-programming or reflection here because when we iterate through each item of varnames, what we’re getting is a string that contains the name of the variable whose value we want to get. In other words, the following will not work:

By prepending a ! to varname, Bash will understand that you want to get the value of the variable whose name is equal to varname. That’s right, Bash knows metaprogramming!

Once you’re done jumping up and down with delight, you’ll need to sit back down and realize that we’re not quite done yet because in one of the tests above, we should allow for a variable to be defined but empty. In our code above, however, should ${!varname} return an empty string, [ -z will consider that undefined!

Luckily, Bash comes with yet another trick which is:

So, again, in line 3, all we did was add +x and what Bash will do is that if ${!varname} is defined but empty, the string x will be appended to the empty value, returning x. However, if ${!varname} expanded to an undefined variable, Bash immediately stops expansion and won’t even append x (because there is nothing to append to!) which means that nothing will be returned.