I hear this truism regularly and I can also feel its effects whenever new members join a team I’m in but I’ve never really given it much thought until now. In this blog post, I’ll attempt to dissect and visualize Brooks’ Law to find out what it is exactly about adding new team members that negatively affects short-term team progress.

The Components of Team Progress

We can compute the relative progress of a team as follows:

That’s easy enough to grasp but there are a few things to consider when obtaining the dividend and divisor so let’s break this equation down.

The thing to note about the first component, Completed Work, is that it’s not independent. That is, the amount of Completed Work is affected by training effort that existing members have to provide to new team members. Therefore, we can estimate Completed Work as follows:

For the purpose of this discussion, let’s designate “Completed Work if Uninterrupted” as a constant with a value of 100. That is, if the team were to work uninterrupted for a given period of time, they would be able to finish 100 work items (In Scrum, this would be 100 stories but I’m going to keep it generic since it can apply to non-scrum teams too).

As for “Training Load on Team,” if we were to assume that 1 existing team member will be assigned to each new team member and that the former needs to spend half their time training the latter, we can compute it as follows:

That is, training one new team member is equivalent to 1 work item. If the project had a high degree of complexity, however, then training would be more than 1 work item.

We can estimate the divisor, Total Work, as follows:

In this formula, we consider “Additional Coordination Required” as a set of work items. Note how we don’t have a component called “Existing Coordination Required.” To simplify the formula, we just lump that in with “Original Work Items.” We could have explicitly included it as a separate component but since this whole exercise is really just a means to estimate rather than accurately quantify “Total Work,” this simplification will suffice.

Notice how we did not include “Training Load on Team” in this formula. This is because we’re only interested in the work that directly contributes to the completion of the project.

I’m discussing this component in its own section because this is the part that can potentially have a significant effect on the whole formula and is also the centerpiece of Fred Brooks’ book. In that book, if we were to represent a team as a graph, then the members would be the nodes and the coordination that needs to happen between them would be the edges.

Using the formula on our above diagram, we get 10 which is exactly equal to the number of edges depicted. If we were to add 1 node to the above graph, that would add an additional 5 edges to the graph since the existing 5 nodes would have to connect to this new one. Indeed, if we apply the same formula, we would get:

Remember though that we’re only interested in the Additional edges created by adding a new node. To get that, all we have to do is:

And for each component, we just use the same formula to compute edges.

SIDENOTE: For this discussion, we consider the coordination that needs to happen between any two members to be 1 work item. For complex projects, This may be larger than 1 work item.

Visualizing Brooks’ Law With the Diagram of Effects

Now that we’ve broken down the components sufficiently, let’s visualize how one component affects the other using the Diagram of Effects as defined by Gerald M. Weinberg in his book Quality Software Management: Systems Thinking. 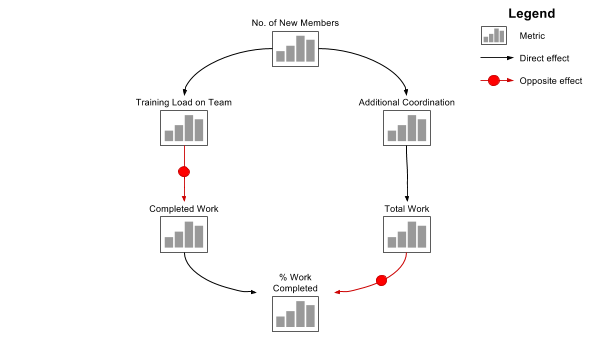 From this graphic and our computations, we can deduce a few things: 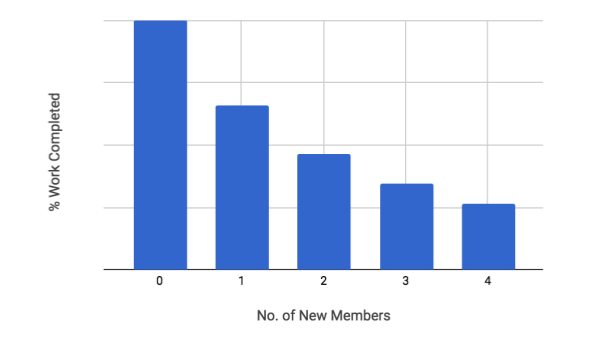 The point of this article was to show how increasing the number of members can affect a team’s progress. From what we’ve seen, Additional Coordination Needed has the biggest effect on progress due to its quadratic nature.

I’ll leave you now with a few questions as an exercise:

Feel free to share your thoughts in the comments section below.