If you’ve ever worked with Jenkins shared libraries, you know that they’re a great way to simplify your Jenkins Pipeline DSL scripts by abstracting out common code to a function. For example, this:

And you also get the added benefit of being able to re-use that same function in your other pipelines. Very important in this era of microservices where each microservice has a pipeline of its own.

The Problem With Shared Libraries Though…

Is that they’re awesome once you’ve got them working the way you want. While you’re still working on your library, however, it’s a major pain to write code, commit to your repo, push upstream, then trigger some test pipeline only to see that you committed some syntax error or you forgot to close a bracket or you fat-fingered a function. so now you have to do that all over again, and again, and again until it’s just right.

What if you could employ TDD on your workstation so that you can catch minor errors and regressions immediately? What if, as soon as you push your changes upstream, Jenkins runs the same unit tests so that you and the rest of your team can be on the same page about the state of your shared library?

That’s what we’ll be learning about in this blog post. So if you want to regain a little bit of sanity when managing your Jenkins pipelines, keep on reading!

We’re working with Groovy and, therefore, Java and friends here so we’ll need a few things installed in your local workstation and on your Jenkins workers:

I’ve read of different ways to get your pom.xml to work just the way you want it to but I’ve had to massage mine so that it can run the tests and produce JaCoCo data that I can use in Jenkins. Here’s what mine looks like. YMMV. I’ll also provide references to my sources at the end of this blog.

When designing a new class or object, your first step should always be to think about its API, its responsibilities, and its collaborators/dependencies. Those same steps remain useful in this case so I highly recommend doing that. For this blog, we’ll re-use the example I provided at the top of this page.

Let’s write the global var/function in our vars/ directory now. Remember that we want this function to be as thin as possible so that we can test as much of our code as possible. To provide the above API, we’ll write our vars/getReleaseID.groovy like so:

Like I said, as thin as possible. Also note that we should consider this a draft for now and is only meant to guide us as we write our unit tests for our actual code which will now reside in the ReleaseIDGenerator class.

Notice line 4 above how we’re passing this to ReleaseIDGenerator’s constructor. This is necessary because the objects instantiated from ReleaseIDGenerator will have a different context from our pipeline script and so it won’t have access to sh or echo and so on. However, since our global function getReleaseID has the same context as our pipeline script, when we pass this from there, we’re actually passing your pipeline script’s context to our class. The latter part is a good thing because we don’t need to require our shared library’s users to remember to pass this everytime they call getReleaseID().

An even bigger plus about this dependency injection is that we can use that to mock or stub out the pipeline script when running our unit tests! Let’s see that in action next.

This will be the initial contents of test/org/yourcompany/testReleaseIDGenerator.groovy

Let’s break this down:

That’s it. We now have our first unit test. Run mvn clean install should get you a report saying your test failed. Now it’s time to write the code to pass the test!

Running mvn clean install should now get us a passing test as well as a JaCoCo exec data file in the target/ directory that we can use when we run these tests on Jenkins.

You don’t need this step if all we want is to run the unit tests on Jenkins but it’s a good idea to do this now to avoid any weird issues down the line. This shared library should be configured in your Global Configuration page this way: 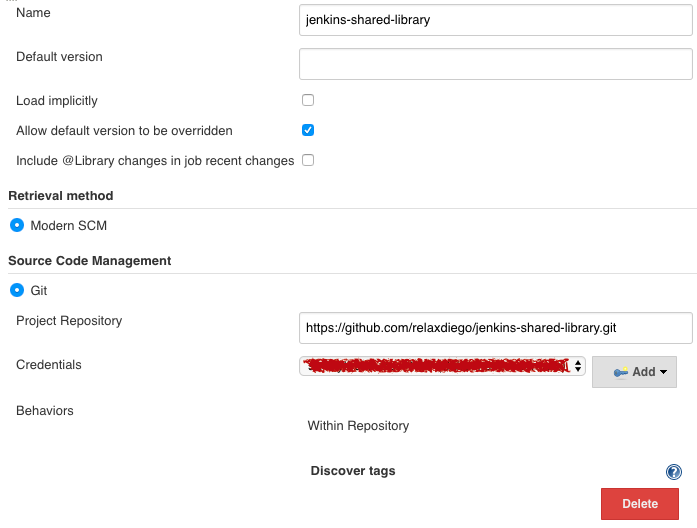 One of the important parts above is that “Load implicitly” must be unchecked so that Jenkins doesn’t load the library on the pipeline script that’s going to be testing the library!

This will also mean that you’ll have to include the following line in your application’s Jenkinsfile:

That’s not a big deal though compared to the benefits that we’re getting from having an automated pipeline for our pipeline’s libraries!

So now we need to create a Jenkinsfile for our shared library so that Jenkins can run the unit tests and report on code health for us.

Commit that to your repo, push it to origin and now you should have the beginnings of a unit tested shared library! All you need to do is go to Jenkins, create a Multibranch pipeline and then make sure that your git repo will call its webhook. Once you have that in place, you’ll have Jenkins automatically run your unit tests and report back on your pull requests or even direct pushes to origin/master or whatever remote branch you’ve configured your pipeline to watch.

This Isn’t a Silver Bullet

I’m not the first one to do this kind of thing. Here are some references that helped me along the way: