In my previous post, I announced that I open sourced my Open vSwitch lab as well as the scripts and files that I produced as I followed David Mahler’s introduction to VXLAN overlay networks with Open vSwitch. In this post, I’m going to re-purpose my Open vSwitch lab to explore hardware VXLAN tunnel endpoints (HW VTEP).

A Quick Review of Hardware VTEPs

The idea behind hardware VTEPs is to create an overlay network that connects VMs and Physical Servers and make them think that they’re in the same L2 network even if they’re on opposite sides of the globe.

In this article, we will create the following “physical” setup using the ovs-lab:

From that physical network, we will overlay two logical L2 networks:

Fig. 1 above implies that we will repurpose Server 2 into a hardware VTEP. The diagram also implies that we will need to launch two more machines, Physical Red 2 and Physical Blue 2. Finally, the diagram indicates that we need to attach both physical machines via patch chords to free interfaces in our hardware VTEP. While all of this is the ideal set-up, it’s impractical since we’re just running this set-up in our local machine. So we need to get a bit more creative.

Instead of launching Physical Red 2 and Physical Blue 2 as separate VMs, we’re going to launch them as containers within Server 2 using Mininet. We will then attach them to OVS bridge S2. 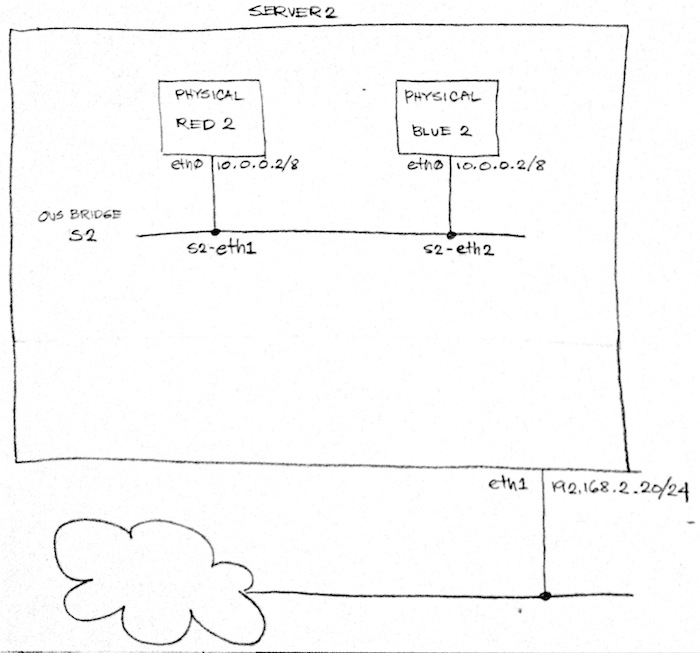 We need some sort of translator between the hardware_vtep and the Open_vSwitch databases. Fortunately for us, the Open vSwitch project comes with a sample script that does exactly that! This is the ovs-vtep script which makes OVS emulate a hardware VTEP. 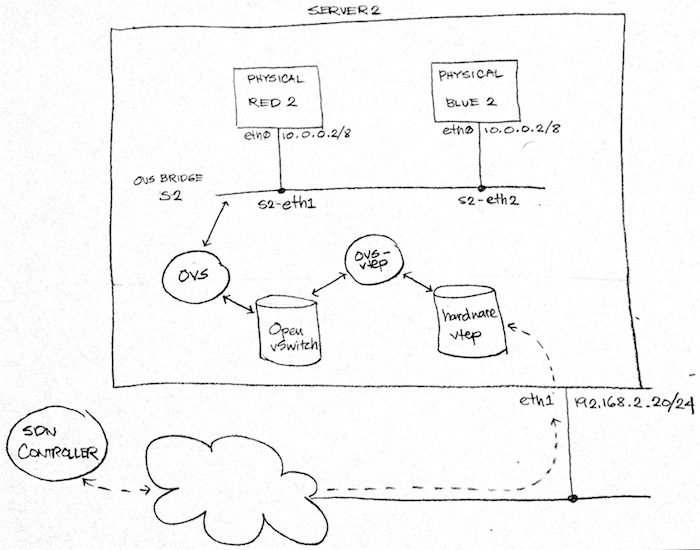 WARNING: ovs-vtep is a great way to try out hardware VTEP with your SDN controller. It’s not a great way to deploy HW VTEPs in production though since it’s just for demo/educational purposes.

Once we have the setup in Fig. 5, we can regard our “physical” network as if it’s set up like Fig. 1 (Re-displayed below for your viewing convenience!)

Fig. 1: Because You Can't Get Enough of This Cool Diagram!

Now that we have an understanding of what we want to achieve, it’s time for some hands on! First, pull the latest code from the ovs-lab:

Next, let’s check connectivity between server1 and server2 by pinging from either side:

If you’re unable to ping, you likely rebooted your host machine or your VMs and they lost a few network configurations. This is a known limitation of the lab that I haven’t gone around to fixing yet. In the meantime, reprovision your entire ovs-lab by running the following from your local machine:

Once reloading and re-provisioning is done, you should be able to ping server2 from server1 and vise versa. The next thing we need to do then is to instantiate red 1 and blue 1:

From the mininet prompt above we need to create a vxlan port on s1 and point it to our hardware VTEP at 192.168.2.20. Note that the following command must be in a single line:

Finally, we will add the flows to s1:

Server 1 is now set up. Leave mininet running there as we move to our emulated HW VTEP.

Setting Up Our Hardware VTEP

Up next, we will create our “physical” servers in server2 as in Fig. 4 above:

Next we will create and load the hardware_vtep database in Server 2:

We then register our switch s2 to the hardware_vtep database and indicate our switch’s tunnel IP where VXLAN tunnels will be terminated.

Let’s test our work so far. Run the following command to check if we succesfully declared our physical switch S2 in the hardware_vtep database:

Everything should have the same value except for the _uuid field which is auto-generated by OVSDB.

Let’s now run ovs-vtep as a daemon so that our hardware_vtep settings will be translated to OVS settings. This script comes with OVS 2.3.x which is installed in both Server 1 and Server 2. However, that version of ovs-vtep does not work with Mininet. The latest version of the file in Github has the fix necessary to work properly with Mininet. I’ve also included a copy of it in the lesson02 directory.

So let’s run the modified copy of ovs-vtep. Note that the following must be in one line:

The command returns immediately without any output. To check that the command executed succesfully, let’s check the ovs-vtep log:

Based on Fig. 5, the SDN controller can be anywhere on the Internet as long as connectivity can be established between it and the hardware VTEP. In our case, we’ll log in to our internet VM and send instructions from there.

NOTE: This section will use raw OVSDB Management Protocol messages to manipulate the emulated hardware VTEP. If you need explanation on the messages being sent, Please refer to RFC 7047 and the hardware_vtep database schema.

Next, let’s send a sample message to the HW VTEP using the netcat tool and then process the response with jq for pretty printing to the terminal. In this case, our message is a simple echo method call which should send us back the same message:

The above only tells us that OVSDB is, indeed, running. Let’s check if we loaded the hardware_vtep database properly by asking for its schema:

In preparation for attaching Physical Red 2 to the logical network that Red 1 is attached to, let’s go back to Server 1 and have red1 start pinging red2

Leave it like that and go back to internet.

Now the exciting part: let’s actually attach Physical Red 2. This command is a bit more involved so I’ve pretty-fied it and saved to a file so that you can study it more easily. The file is at /vagrant/shared/lesson02/attach_red2.json and we can send it to the HW VTEP using the following commands:

At this point red 2 should be attached to the same logical network as red 1 and, if you head back to Server 1, you should see the ping change to:

That’s it for now. I’ll let you go ahead and experiment with attaching blue 2 to the blue network. I’ve prepared /vagrant/shared/lesson02/attach_blue2.json for you. There is also a get_locator_uuid.json in the same directory for getting the UUID of Server 1 in the Physical_Locator table. Also, I recommend that you have RFC 7047 handy as you study the two json files. If you have any questions, please leave a comment below.

I wouldn’t have been able to create this article without the help of the following people so a big THANK YOU to them!